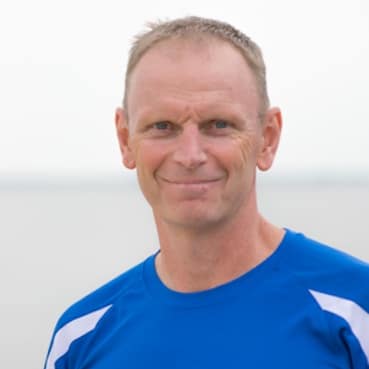 Seamus is an STA Level 2 Open Water coach and ASA Level 2 Teacher of Aquatics. He is a Sports Science graduate and a Fellow of the Institute of Swimming. He started his Swim Smooth journey in 2012, taking the 3-day coach education course at Cardiff International pool. He then further developed his own coaching and swimming before completing his Swim Smooth certified coach training with 3 unforgettable weeks in Perth Western Australia in early 2016, gaining fully-certified status in August that year.

Seamus has swum in pool and open water since early childhood, spending summers in the North Sea at the Felixstowe family beach hut. He was in at the start of triathlon in the 1980s and in 2013 completed the Outlaw Full Distance swim in 60 minutes. He won his age group at the 2015 Coniston end-to-end swim (5.25 miles) and the 2 mile event at the 2016 Great East Swim. In recent years Seamus’ Swimscapes team has taken 3 consecutive podium places among over 100 teams at the Aldeburgh Team Relay Triathlon.

A real swimming highlight came in August 2016 when Seamus was part of a 4-person English Channel relay team which completed the famous crossing in 14 hours. Then in February 2017, and somewhat against the odds, he became only the 209th swimmer worldwide to complete the extreme IISA ‘Ice Mile’ – water temp 4.6C, no neoprene – slightly crazy perhaps, but an achievement in swimming that will forever bring a smile…and a shudder!

As well as coaching and teaching, Seamus seeks to enable others to develop their own swimming, and to bring swimmers of all types and backgrounds together, sharing support, swimming…and cake! To help make this happen, in 2012 he set up Felixstowe Swimscapes – a free sea-swimming group, which swims year-round and (as of early 2020) has over 1000 members.

Seamus is based in his home town, Felixstowe, on the North Sea coast of Suffolk in eastern England. Felixstowe is an excellent open water swimming location due to its easy access and lack of dangerous obstacles and currents – also ideal for Seamus’ 1-to-1 open water swim coaching sessions.

Felixstowe is easy to reach from Cambridge and the Midlands at the end of the A14 and via the A12 from Essex and London. There are good train services from London, Norwich and Cambridge via Ipswich.

Your ticket for the: Seamus Bennett

SwimTayka is here to answer your questions. Ask us anything!
Hi, how can we help?