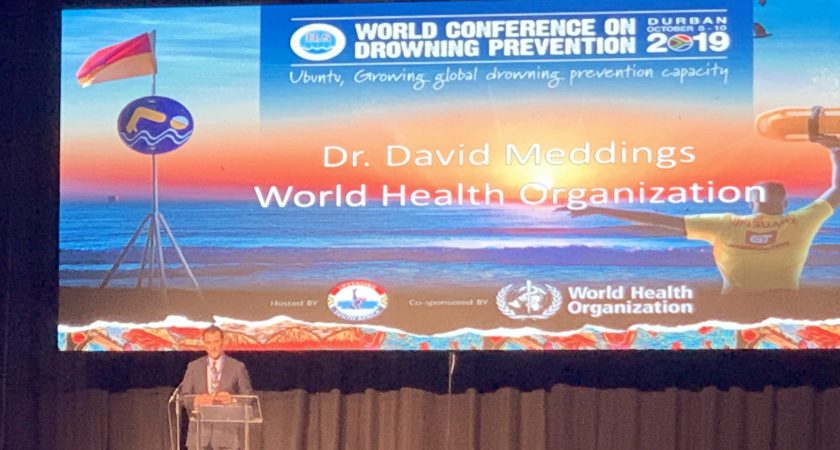 World Conference on Drowning Prevention in October 2019, Durban, South Africa Back in 2017, Bryan and Dena attended the conference in Vancouver when SwimTayka was still a young emerging brand in the world of Charities and NGOs, and we were still finding our feet. So attending this conference 2 years later, we were more focused on what we wanted to get from the event and the people we wanted to meet. There were some pretty powerful players here in Durban, and although to meet them and get our name on their radar would be great, what we were really after were the other NGO & Charity contacts that we could build relationships with and information that would serve to help us improve. Day one saw Graham Ford – President of the International Life Saving Federation (ILS) open the conference and reiterated that 360,000 people a year die from drowning. That’s 40 people every hour of every day. What we hadn’t considered before, was that these figures do not include ferry or flood disaster drownings. That is quite shocking. We heard speeches from other senior leaders in their field; Dhaya Sewduth – Life Saving South Africa (LSSA), Mr Sam Ramsamy – International Olympic Committee (IOC), Dr David Meddings – World Health Organisation (WHO), Dr Olive Kobusingye – Makerere University School of Public Health, Uganda, and Justin Scarr – Royal Life Saving Society Australia (RLSSA), all added their weight to the message that since the last conference two years ago, the statistic hasn’t really changed. The message was loud and clear, that data collection is improving and identifying the causes is becoming clearer but we need to do more. So what did we learn? Many drowning deaths are related to poor Water Sanitation & Hygiene (WASH). https://www.who.int/water_sanitation_health/en/  This is a leading principle which most of the world’s leading organisations have adopted in the fight against drowning. Affecting the world’s low-income communities, the conditions under which many live, expose them to open water more and increasing the risk. Open water such as wells, rivers, lakes and more homely things such as buckets and other water collection vessels. And latrine pits. a death we can barely even think about. Most drowning deaths around the world are children under 5, who drown within or around the home whilst unsupervised for just a few moments.  Most drownings occur in Summer and most in the afternoons. More young children drown during the week than at weekends and even more on public holidays. What stood out for us next, was that the next most at danger group were young men 16 – 34. Typically this age group are over confident and more adventurous so put themselves in greater danger. They have jobs such as fishermen that put them at higher risk too.  At SwimTayka, our focus is on the group of children in the middle; 6 – 16. If we can catch them at this age, we hope our work will help reduce the statistics of not only the children in this age group but also in the next age group too. Many other organisations are working on all … Continue reading World Conference on Drowning Prevention – 2019

Copy and paste this URL into your WordPress site to embed

Copy and paste this code into your site to embed