And now for something completely different…

The team assembled in the car park at Dover Harbour between 9-10 pm on Thursday 1st August, we were all buzzing with nervous anticipation! We boarded Anastasia and met the pilot Eddie and his crew as well as our CS&PF observer Geoff. We stowed our belongings and set off for Samphire Hoe where our challenge would officially begin. Once at Samphire Hoe, Alan jumped in and swam to the beach and, at the sound of the claxon, he re-entered the water and our relay was officially underway! The time was 11:23 pm.

My first swim was at 3:23 am. It felt very surreal… I was stood on the back of the boat with the sea splashing around my feet in the darkness. I was watching the flashing green light on Stephen’s head edge ever closer to me through the water, and then I heard Eddie’s son shout “In you go mate!” and that was it… I jumped into the darkness… it wasn’t as cold as I’d expected and I soon settled into my rhythm, swimming alongside the boat. When swimming at night time, the boat has spotlights trained onto the water but I found them quite dazzling so chose to swim towards the front of the boat just outside of the glare. I felt comfortable in the water, the swim took on a kind of ethereal quality and I zoned out a bit. It was like a kind of sensory deprivation… swimming in the darkness, not being able to see past your hands, with the only sounds being the sound of air being drawn into & expelled from your lungs, and water sloshing around your ears. Occasionally I’d see a jellyfish ‘glowing’ from the light of the boat, but they were never of any concern. They added to the ethereal quality I mentioned before. After what seemed to be a very quick hour, I was out and Alan was back in the water. Wrapped in my dry robe, I disappeared back below deck to dry off and snooze a bit before my next swim. 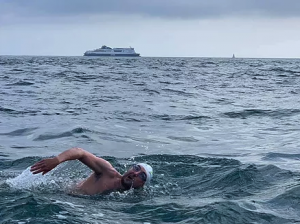 Swim number two started at 8:23 am. Prior to that, I’d watched over Suzanne whilst she put in another solid swim. I felt a little nauseous but had found an excellent remedy in ginger & lemon tea, sweetened with a bit of carbohydrate powder! It settled my stomach and gave me a bit of an energy boost because at this point I really didn’t feel like eating anything. The sun had been up for a while now, and we could see Dover behind us and France in front of us. The odd container ship or ferry was visible, reminding us that the English Channel is one of the worlds busiest shipping lanes. By now we were past the ‘zone of separation’ and were well into the French shipping lane. The current was pulling strongly on the day we swam, and at this point, it was pulling us at our fastest. Having subsequently gone over our track, it looks like I covered nearly seven kilometres during that second hour! It goes to show how much of an influence the tide and currents can exert.

After my second swim, I sat on the deck, taking in our environment and just enjoying the moment. The sun was warm, the sea was relatively smooth and everyone was in good spirits! During our swim, we encountered various wildlife… from a seal to dolphins, jellyfish and even a couple of juvenile sunfish! The latter being something which Eddie had never seen in the Channel before. They are generally found in more tropical waters and can grow to be a couple of tons in weight. These were babies though, more the size of a dustbin lid. 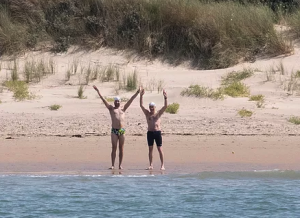 Before my third swim, Eddie had a quiet word and suggested that, although it was a big ask, I could be the one to take us on to shore in France! We were about 4k from shore at this point… so, with the adrenaline pumping, knowing we were close, I dove into the water and put my head down. I really gave it some beans for that last hour, I inadvertently drifted away from the boat as I was so hell-bent on getting to shore! I nearly made it, but the rules are strict and changeover must occur on the hour. Whilst I was still swimming, Alan had entered the water and was just behind me along with one of the crew members who by this time was in the small rib that they use to take people too & from shore. He pulled up alongside me and told me it was time to let Alan take us home, however as we were so close they allowed me to follow him in which meant I was able to step foot on to the beach near Wissant. It took a further seven minutes on top of my hour for Alan to reach the shore, meaning we’d completed our relay in fifteen hours and seven minutes.

The journey back to Dover took less than three hours, and we revelled in our victory (or dozed!). Once back, we dumped our stuff at our hotel, showered and went for a celebratory drink and a meal. That first pint went down a treat! It was lovely to reminisce about our day but by 9 pm we were all pretty shattered so headed back to our hotel for a well-earned sleep. Reflecting on our journey, I have to give thanks to everyone involved in the event. Especially the team; Bryan, Suzanne, Richard, Stephen, Alan and Lucy… as well as Eddie Spelling and the Anastasia crew. You may have heard his name mentioned in the news recently as Anastasia was the boat who completed the first-ever four-way crossing with Sarah Thomas! Our thanks to Geoff Cox, our observer who remained cool, calm and collected throughout. And last but by no means least, a huge heartfelt thank you to my lovely wife and daughters who have supported and encouraged me throughout and who continue to support me whilst I’m away for hours on end training. 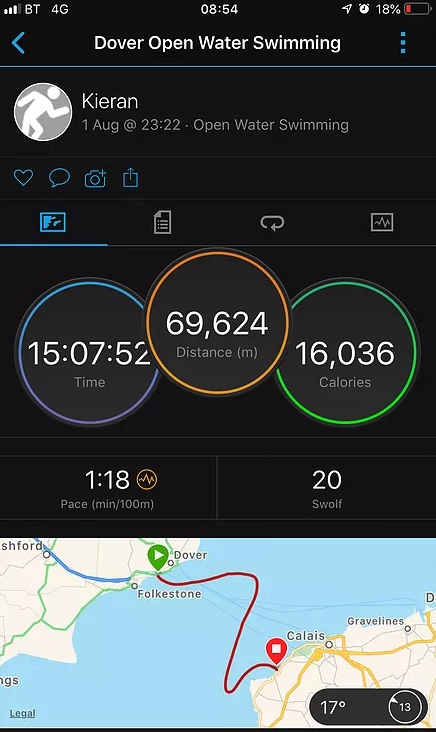 If you’d like to read about how I ended up becoming part of the SwimTayka relay team, and what the prevailing weeks were like, please read the full account on my blog! https://kieransmyth1.wixsite.com/coriniumwhisky/single-post/2019/09/20/And-now-for-something-completely-different

We use cookies to ensure that we give you the best experience on our website. If you continue to use this site we will assume that you are happy with it.Ok