Victoria Dolceamore, of Margate, attempted to swim the English Channel last week as part of a relay team, but they did not make it to France because one of the swimmers had a stroke as a result of a seizure while swimming. 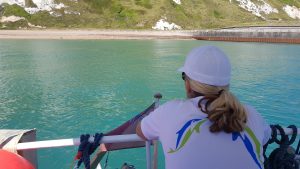 “We were doing really great, plugging along. We crossed over the separate zone and into French territory, and we were tracking really well at the time,” said Dolceamore, a mother of three.

Everyone was assigned a partner to watch in the water while they were on the ship.

As she was awaiting her third turn, Dolceamore was keeping an eye on a 24-year-old relay team member — a military officer and physical trainer for the British Army.

“Fifty-six minutes into his swim, he grabbed his chest like he can’t speak,” said Dolceamore, who added that hand signals were worked out in advance for those in the boat to communicate with those in the water. “I said, ‘Are you OK?’ … He did not respond.”

The boat’s pilot yelled to the swimmer to turn over, which he did, but then he started to sink.

Dolceamore suggested she jump in and save him, but she was told not to.

“The first and second mate put towels under his arms and pulled him up. They dragged him up, and he was having seizures. They said he had a stroke as a result of a seizure.” Dolceamore said. “We had to abort because he was unresponsive. He couldn’t speak. He bearly breathing. It was absolutely awful.”

The water was really cold, at about 60 degrees, and they were not wearing wet suits, Dolceamore said.

They were two-thirds of the way through the swim and about six to seven hours from finishing, Dolceamore said. But they realized the swimmer needed to go to a hospital.

They decided against helicoptering him out and had to speed back to Dover, she said. 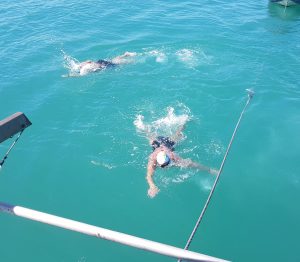 “We were met on the way by an ambulance boat of the Royal National Lifeboat Institute paramedics, who boarded our boat at top speed, and they managed to stabilize him, and the doctors remained on board until we were back at port, where he was rushed to the hospital,” Dolceamore said.

The swimmer recovered at the hospital. The doctors ran a battery of tests, but still don’t know exactly what happened, Dolceamore said.

“There were no jellyfish stings, no injuries, no physiological clues leading us to any real conclusions about how the stroke happened,” Dolceamore said. “Of course, everyone is disappointed about not finishing the swim, but more important, we saved a life.”

South Jersey financial support and sponsorship made Dolceamore’s first attempt to swim the English Channel possible as part of a relay with the nonprofit organization SwimTayka.

Dolceamore has been in close contact with SwimTayka’s leadership to find a way to allocate money that was donated to her.

Along with the support of SwimTayka, Dolceamore decided to use money to partner with the Brigantine Aquatics Whelan’s Whales program in Atlantic City.

“SwimTayka will partner to do a program in Atlantic City in 2019 that serves a similar mission as Whelan’s Whales — drowning prevention and environmental education that serves to find ways to educate a generation of young people to improve action on land that improves the quality of our water,” said Dolceamore, who added she now wishes to swim the English Channel solo.

We use cookies to ensure that we give you the best experience on our website. If you continue to use this site we will assume that you are happy with it.Ok